I feel like I’m always running late. Late for meetings. Late for appointments. Late for dinner. Late for parties. Late for dropping off the kids. Late for picking up the kids.  And certainly late for holiday decorating. If I’m lucky, I can throw together decorations a week before any given holiday. Ten days is organized!

Well…I wouldn’t say it’s organized really, but I started tinkering with a few decorations today. After all, I’ve gotta do it for the kids, right? I don’t have a great Halloween imagination, and because Halloween is still slowly arriving in Sweden (it wasn’t here at all when I moved here 11 years ago) we don’t get the visual clues or inspiration in all of the stores, nor do we have mega Halloween decor to purchase. Being a repurposer and recycler, the lack of things to buy doesn’t bother me so much, but I do miss the cultural clues bombarding me and telling me when a good ol’ American holiday is coming up.

So, I’ve become quite dependent on blogland for my Halloween inspiration – and this year I’ll be ‘borrowing’ lots of great ideas from fellow bloggers for a fun DIY Halloween. First out is my little mummy man. He was inspired by this mini mummy from Camilla at Family Chic. I fell in love at first site.

And here’s my guy. I see now he’s a tad bit skinny in the middle…but he might just stay that way. He’s made from a coated electrical wire that was super easy to bend, and strips of an old Tshirt from my husband…that he hasn’t noticed missing yet.

Notice the bats going along my cabinets in the mirror reflection? Those were inspired by Dana’s wall at Made, and the cut-out pattern for the bats came from Country Living. I went out into the yard and hauled in that log for him to sit on, as well as that piece of marble slab from the garden to set under my little pumpkin.

I think I’ll call him Rodney. I made him in a ‘car crafting’ session during our day trip last weekend – you can also see the wire stems of some more button flowers I was making, as well as wallpaper samples for cutting out some hearts to make a baby present for our next door neighbor’s newborn.

I knew if I didn’t get my decorations up soon, that the effect of this great countdown project would be lost. A big thanks to Kiki at Kiki Creates for the free numbers printable. 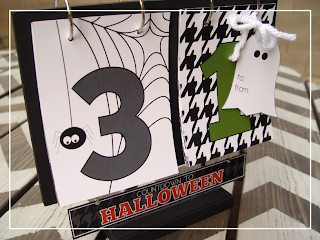 Here’s what I started with…a couple of logs from the basket by our fireplace, a hammer, a couple of small nails, a hole puncher, and Kiki’s cute numbers.

Here’s what I did with the wood. I literally set one piece across the top of the other after hammering in the two small nails. Lazy? Or efficient!

I loved the background patterns on the number printables, and they add just the right bit of funky alongside my rustic homemade stand.

Next I grabbed a few misc. parts and pieces to put together a little stand for the cheesy pumpkin. I’d thought about replacing it with a real pumpkin, but I think I’ll keep this one since I’m sure the kids will appreciate it.

Now, I know there are 11 days until Halloween, but the pattern on the ‘1’ card is the same, and it looked better in the photo to have a different pattern beside. It’s all about the presentation.
So that’s a good start on my late Halloween decorations, and the rest will have to wait until next week as this weekend is all about family fun!
Until next time…
Mike

Want to join the discussion?
Feel free to contribute!

This site uses cookies. By continuing to browse the site, you are agreeing to our use of cookies.